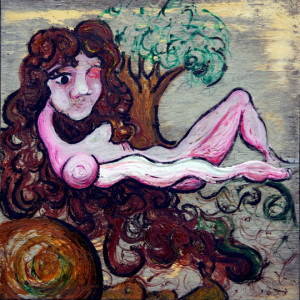 I Used to Have a Mouth

I used to have a mouth, on that I pledge. Silly fool that I am, I used it far too often so it got tired and left me. It took its lips, its crooked smile, its twelve o’clock shadow and it left. I waited for it to return… obviously. I didn’t want to go anywhere waited. Had I known how long it was going to take, I would have been more prepared. I would have brought something to read and perhaps some scissors to cut my hair… some food to eat.

I waited for my lips so long that my cells began to regenerate into the earth just like when a fence is in the way of a tree and the tree deals with it in the most practical way possible… it engulfs the fence. That’s exactly what my body did. It engulfed the earth. The only thing to eat was a tree’s seeds and after a year the vegetative diet something rather strange happened. You see, evolution is a miraculous thing. I noticed something growing in my belly button. It was a little green sprout. Silly mouth shouldn’t have gone off on such a tangent.

One: you just smashed your honey jar.

Two: It’s all over your floor and honey is hard to clean up. In fact, even as you clean honey, you create more of a mess. Honey is viscous, it drips. It sticks. It drips. It sticks, more specifically it sticks, to your socks. Which stick to other things.

Three: Honey is very expensive, and now your very expensive honey is all over your floor, and you haven’t the money to pay someone to clean it up for you.

Four: You can’t salvage your honey because the jar has smashed in to a bunch of pieces, and there is shards of throat slicing glass in the pool of honey on your floor. So instead, it just sits there, in that large pool, mocking you.

You could try to spoon it up, but there is a risk…

Five: Bees are going extinct and who knows how much longer honey will exist.

Six: Since it was honey time, it means it was early morning, and you’re already grumpy. This is the most unfortunate time, but most probable time, to break your honey jar.

Seven: If the Queen of England comes over and demands that she has honey for her tea… well you haven’t got any. She will be less than impressed.

Eight: honey is already a soft spot because you grew up with the spelling of Hunny from Winnie the Pooh, and now you’ve found out you’ve been misinformed, and it saddens you to know you were so stupid for the beginning 10 yrs of your life and even now you catch yourself wanting to spell it hunny, and not, honey.

Now your floor is sticky, you have no honey for your toast, and the absolute topper to this list… It is all your fault.